Challenges in the final year before opening 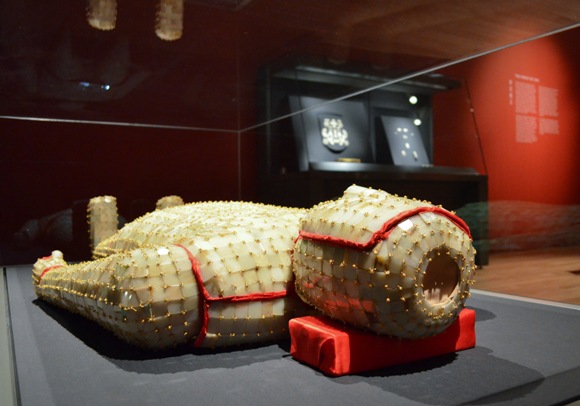 A Han royalty jade suit, one of the many 1st grade objects requested from China.

The greatest challenge in negotiating the exhibition in the final year came about because I know the material so well.  As this period is my speciality, even I have to admit I was demanding.  I really only wanted the very best items.

China normally only loans around 20 percent first grade objects from any exhibitions list, so for every 100 items only 20 would be first class.  We were very lucky that our planned year for the exhibition coincided with the 2012 Olympic Games and the 40 year anniversary of UK China political relations.  Because of this, the exhibition naturally evolved into China’s biggest cultural contribution to the UK for the Olympic year.  They very generously provided us with roughly 32 percent first grade objects, which is totally unprecedented in any exhibition ever to leave China.

The second big challenge was why we wanted so many.  We needed a wide variety of materials to tell the story, but our Chinese partners could only loan to us if we had the required space for the objects.  This meant providing detailed exhibition designs very far in advance.

We finally knew the exhibition was definitely going ahead with all the items we needed in the autumn of 2011 when our Chinese partners visited the galleries and approved the list of artefacts to go ahead.

The autumn of 2011 and spring of 2012 were frenetic for the exhibitions team, with roughly around six months to pull together all the final elements for the displays and to make the careful arrangements of the transport of the items.

What people rarely realise about exhibitions is that they are full of drama behind the scenes.  A visitor will only ever see beautiful pristine displays, everything peaceful and in its place.  But to get there involves all the excitement and challenges of any major show, from the very beginning to the final minutes before opening.  In our case this was everything from last minute translators for our British teams in China, to logistics, to cases and mounting objects with less than three weeks to opening.

All in it has been a 5 year journey getting this exhibition together.  I very much hope everyone who visits enjoys it as much as I have had arranging it.