Creating a tomb inside the Museum 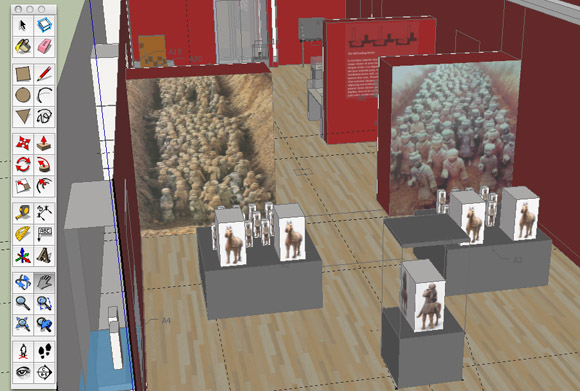 Screenshot of the early exhibition design

As the designer for the Fitzwilliam I have been involved with all sorts of exhibitions, from antiquities and contemporary art to mixed media displays.  The Search for Immortality has been the most complex and challenging show I have ever been involved with; but also one of my personal favourites so far.

The aim was to create a Han tomb inside the Museum. Not in a corny fake recreation way, but to give a real impression of the atmosphere; seeing the objects through spots of light, the feel of walking through an underground palace, and being surprised with different sights in every room.

The key to designing any exhibition is knowing the objects in great detail and what story they will tell together as a whole display.  The curator James Lin walked me through his ideas for the galleries, showing the spaces, the exact function of objects and how they needed to be grouped.  The exhibition shows a very eclectic mix of objects as Han royalty literally took everything they used in life into the tombs.  The items that have survived both looting and the damp conditions in the tombs need a great deal of explanation to be understood today.  With this in mind James had the idea of recreating the different areas found inside the tombs in as near as we could in the exhibition.  Walking through we mapped out areas for tomb guardians and protection, a bathroom space, kitchen area, entertainment areas and the central burial chambers.

The walls in the design were planned in a deep red.  This is a reflection of the red cinnabar that many of these tombs were originally painted in.  Equally the lighting design was planned to give a tomb-like effect, with slightly lower light levels in the centre of the galleries, but spotlight shafts of light on the artefacts.

After a crash course in Chinese archaeology with James, I began working with our conservators on how to protect the delicate 2000 year old objects in their cases. Objects made of certain materials would need different environments; jade had to be on its own; bronze and iron could not be mixed.  Each case would need to be set to exact conditions of light and temperature which would affect the look and feel of the design.

The most arduous task in the early design process was creating the exhibition in 3D. All 375 objects and the cases had to be created to scale and positioned in the galleries in Google Sketchup. James and the Director had a virtual tour of the exhibition 18 months before it opened. 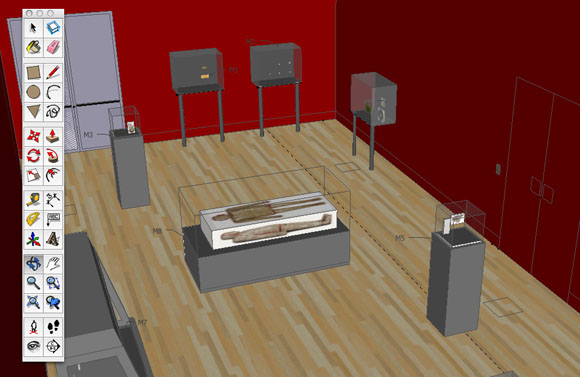 Screenshot of the early design for the jade suit case