Making mounts and stands for the artefacts 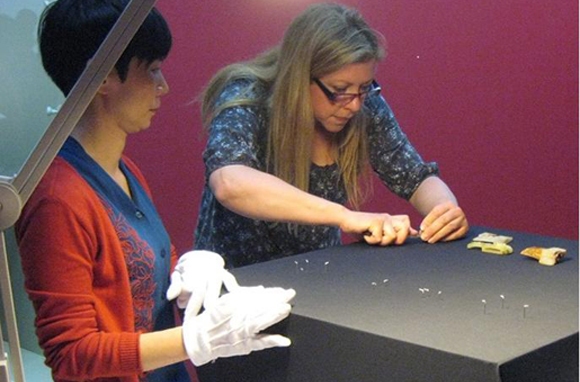 Part of our role as technicians, is to find ways to support our diverse collection when they are on display. Often we use Perspex, an inert plastic that is pliable when heated.  Its malleability enables us to produce custom made stands/mounts for individual objects in order to display them safely and to their best advantage.  Some parts of our collection, such as jewellery, coins or small fragmentary items are best displayed with the use of discreetly placed pins.

Given the wide variety of objects in The Search for Immortality we used both custom made mounts and pinning at various points.

A comparatively small window of only two weeks existed to complete the various display stands and mounts for the objects.  This was a complex process as we also had to work closely with the couriers from China.  The role of the courier is to insure the complete safety of their museum objects and the Chinese were unused to seeing objects pinned or mounted on plastic.  Our mounting methods differ significantly from those used in China, so we had to show how these techniques worked in our own collections.

A trip was made to our Greek gallery to show the Chinese couriers examples of fragile material secured with pins. The pins are made of stainless steel, cut and bent to shape then sleeved with a polyethylene tubing to prevent any scratches to the objects surface. We also showed them heavy objects successfully mounted on Perspex.

In particular we needed to negotiate how to mount the jade objects, and it was agreed that we could use Perspex to mount them. However, we had to concur on the fine details of how this would be done, including the angle.   These objects have a highly polished surface and the obvious concern was their ability to slip.   The couriers initially asked for them to be set at 40 degrees.  After some discussion, we agreed on 60 degrees on the basis that it would be otherwise hard to view the underside of the pieces.

Jade dragon on a perspex mount

Couriers accompanied us and four jade objects to our museum workshop where firstly, drawings on Perspex sheet were made to mimic their forms.  With the use of a variety of workshop equipment, such as our band saw, hand files and milling machine, we cut, shaped and polished the Perspex until transparent.  The fashioned stand was then secured into a Perspex block which acts as the stabilising plinth.

Other objects that needed extra focus were those made of metal.  Particular care had to be taken when pinning the iron sword fragments as mineral deposits on their surfaces were loose and had the potential to flake away at the lightest touch.  Equally the gold items are soft and easily scratched. 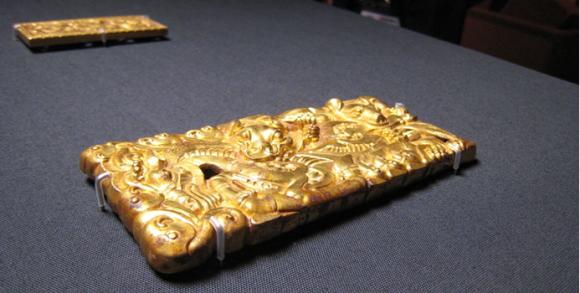 Gold bar being put in place

The challenge of mounting well over 300 objects in two weeks was finding subtle, safe design solutions to produce quality stands as efficiently as possible.  In the end we succeeded in creating mounts that display the objects beautifully and were very well received by our colleagues from China.