Tomb raiders: The dangers of entering the Han Tombs

Picture yourself in pitch blackness.  You have a torch but it is sputtering from the damp, and you are currently waist deep in stagnant water.  You have no idea what pitfalls may be ahead.  One of your party may already be injured or lost.  The walls and floors are slippery and the passageways are steep.  Everyone is haunted by the ghostly sight of ceramic warriors peering in from alcoves.  You feel half-mad from superstition.  Wealth or death lie ahead, but you are unsure which. 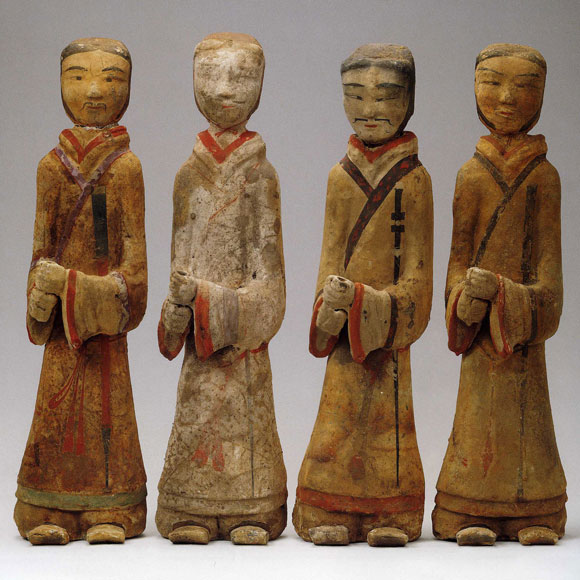 This is a pretty good impression of what it must have been like for the intruders who attempted to loot the tombs of the Han kings.

All the Han tombs that have been discovered to date were looted to a certain extent; the majority of them in antiquity.   The evidence lays scattered across the tombs; broken artefacts evidently disturbed and in some cases datable bodies of unlucky intruders who fell or drowned in the passageways.  Most interesting is the evidence of the intruders’ superstition and fear of government retribution; plaques from the mythic jade suits lie mixed on the floor, the gold or silver that tied them in place stolen.  The jade remains largely untouched; known as the treasure of the aristocracy this could not be sold on without dire consequences from the authorities.

Those that attempted to break in faced many dangers and obstacles.  Not necessarily booby traps in the style of Indiana Jones, but passageways blocked with impossibly heavy stones, pitch darkness and incredibly steep inclines to the lower chambers.   There were also pitfalls where replica privies had been constructed with sewage holes underneath.  Because the tombs were built into solid rock in many cases, drainage was also an issue and there is much evidence of extensive flooding in some of the tombs.

The greatest danger would have been in the minds of the looters themselves.  The tombs were designed so that on entry the intruder would be faced with increasing signs of the tomb’s supernatural protection; terracotta guards holding weapons, terracotta war horses, and large arsenals on display.  Even the least superstitious mind would be unnerved in such conditions.

Looters in antiquity came for many different reasons.  Some were opportunists, but there are also documented cases of rival warlords and political factions raiding and razing to the ground the tombs both for their wealth, but also in a number of cases as an act of revenge, erasing the rival king’s family history.

Even in the 20th century the tombs remained at risk, a modern example being the loss of the jade suit of the Beidongshan tomb.  It is unknown how much of the suit remained at the time, but only seventy-three jade plaques from Beidongshan jade suit survived following a break-in by local farmers in 1954.

For their protection any uncovered tombs were systematically excavated in the 80’s and 90’s, their treasures housed in Museums.  Fortunately the wealth of objects that were stored in the Han tombs was so vast that large numbers of beautiful and important pieces have survived to the present day – one can only imagine the splendour of the tombs when they were first built and untouched.