On the run-up to the opening of The Search for Immortality the Fitzwilliam’s education team worked with local Chinese families to get their take on the show.  The group Chinese Families Together created a booklet for members of the public of 16 highlight objects in the exhibition, featuring descriptive riddles created by their children. 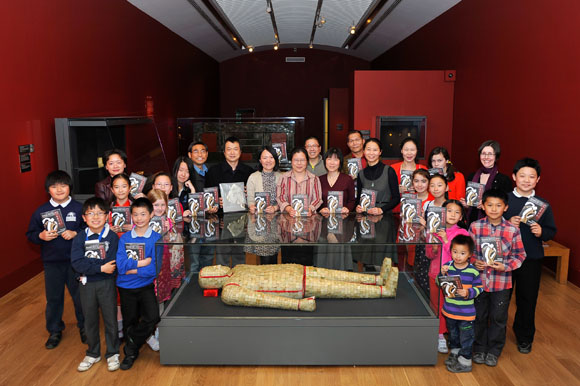 Below Jeremy Yuan, age 8, has contributed a blog post about the project and his riddle.

In January my parents told me there was going to be a Fitzwilliam project about Han China. They asked me if I wanted to be involved and I agreed. I knew this was a chance to get popular. In early March my mum received 24 pictures of Chinese objects, we were meant to choose one.

I wanted to do the toilet but it was too hard to describe so I chose a Chinese emperor’s seal (not the animal seal).

We were invited to the Fitzwilliam Museum on Saturday 17th March 2012 to write our riddles.

At first we went into a fan room to have a practise creating a riddle and comparing a butterfly (not real, a model) with a fan. Next we went into Chinese gallery and we saw a Chinese model of a black elephant and thought about if we were it how would we feel and we described it. Then we went upstairs to the 1st floor and went into a gallery where beautiful paintings were on the wall.

We were given a pencil, an A4 sheet of paper, and a clipboard. We were given the photograph of the object we chose and we wrote a riddle about it. We were very careful that we did not include the name of the artefact.

I did an impressive riddle of 140 words. Like the many other children who wrote a riddle, I’m very proud of my work and I hope there will be another exhibition like this. 

I need ink to produce work,
I give whoever uses me the power of an emperor,
I have writing at the bottom of me,
I have a beautiful golden dragon knob on the top of me,
I long to get up and stretch my body for I am in a really annoying position,
I always want to get up and fly away but I am imprisoned forever and I am getting quite lonely,
I am old and battered but the gold that surrounds me always reminds me of the golden era that I was in.