Remember Indiana Jones and the Last Crusade, where the hero searches for the Holy Grail? The Grail was believed to be the cup that Jesus Christ used during the Last Supper and gave eternal life to whoever drank from it.  A real-life ‘grail’ was discovered in the tomb of the King of Nanyue in Southern China. 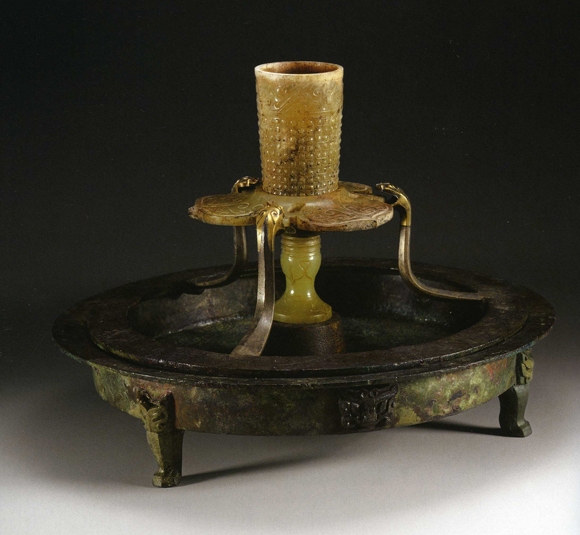 The tubular jade cup is supported by three gold-headed silver feline dragons, and it is believed that it was used to collect morning dew.  It was thought by collecting in the jade vessel the liquid would be imbued with magical powers creating a potion of immortality.

Searching for eternal life was a major preoccupation of the kings and nobles during the late Warring States period and soon after the unification of China. The First Emperor of Qin was said to have sent his court physician Xu Fu, accompanied by thousands of young boys and girls, in search of a remote, mythical island that was said to contain elixirs of immortality.

Emperor Wu of the Han (r. 141-87 BC) was recorded as building a device for collecting dewdrops in the Jian Zhang Palace because he believed that drinking the morning dew mixed with jade powder in a jade cup conferred longevity.  A number of jade cups have been found in Han dynasty royal tombs.

Jade was the most prized rare stone of the period.  Incredibly hard, this translucent pale green stone was a symbol of lasting durability; where other things would corrupt jade would last intact through the ages.  The stone was believed to have mystical properties, particularly in terms of protection.  It was thought that covering the body in the stone would deter corrupting demons and preserve the deceased intact eternally.  To this end the Han elite created incredible jade suits for their burials.  Carved decorative jades of many forms were also used throughout the tombs to infer their mystical protection.

Soon after the Han dynasty collapsed the quantity of jades included in burials declined sharply and the jade suit completely disappeared. This was due, in part, to the spread of Buddhism, which taught that reincarnation of the body was no longer important for existence in the next life. Nevertheless, jade still played an important role in Chinese culture.

Even two thousand years later, Chinese people still believe that jade possesses magical powers that can protect the owner from harm. As a result, jade is still greatly prized and fortunes are invested in it by the Chinese.