The tombs of the Han Emperors, most of whom were buried around the capital of Chang’an (modern Xi’an), were probably looted in antiquity and none has been scientifically excavated in modern times. However, these are not the only Han royal tombs to have survived.

In the early 2nd century BC some of the closest and most trusted relatives of the Emperors were awarded territories within the Han realm over which they ruled as kings.

A number of these royal tombs in eastern China (especially around the Han family’s home town of Xuzhou) were discovered during road building and other projects or as a result of attempted robberies, and excavated in the 1980s and 90s. These excavations have provided a wealth of evidence about Han period tombs, funerary practices and their beliefs about the afterlife.

The Han emperors aspired to be seen as strong and successful rulers who left their mark on history.  As such, among the most important of all imperial acts was preparing for an afterlife as comfortable and glorious as that enjoyed on earth.

The location of the tombs 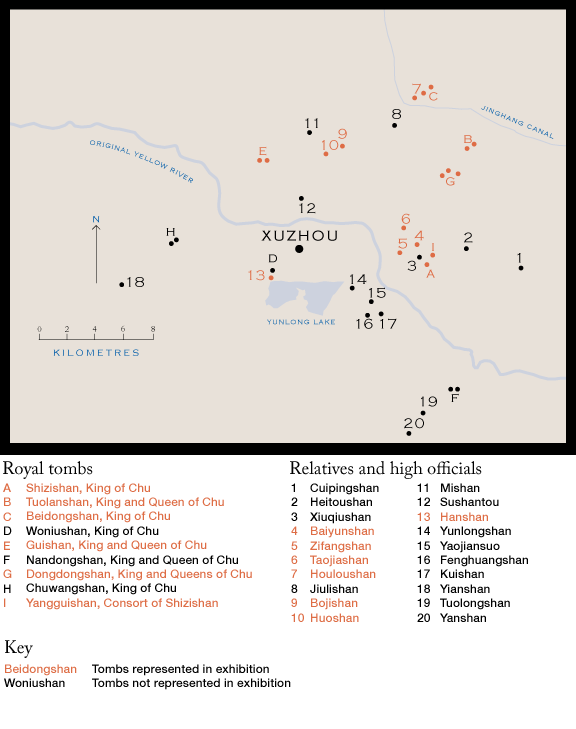 The Han royal tomb treasures on display in The Search for Immortality come from the tombs found near Xuzhou.  These represent the burials of the Kings of Chu, one of the kingdoms granted to a branch of the imperial family by the Han emperors.

The tomb at Shizishan, belonging to the second or third King of Chu, contained a spectacular array of goldwork and jades, including the finest of all the jade suits known to date and a unique jade-inlaid coffin.

A two-storeyed tomb at Beidongshan belonging to one of the second through fifth Kings of Chu yielded a small army of terracotta warriors with remarkably preserved painted decoration and another rich group of distinctive jades.

The third tomb, at Guishan, usefully contained a royal silver seal which allows the occupant to be identified as the sixth King of Chu, Liu Zhu (r. 128–116 BC).

These royal tombs provide a unique window onto the life of the Han royal courts. Unlike earlier dynasties, whose tombs consisted of large pits, most Han royal burials were cut horizontally into the living rock of the hillside. A shaft-like corridor led to a suite of rooms, presumably reflecting the layout of the deceased’s palace, which was to be his residence in the afterlife.

The tomb would be provided with all the luxuries of court life: furniture, kitchen utensils, tools and weapons, ritual equipment, jewellery, foodstuffs, toilets and other appurtenances of royalty, including their unfortunate concubines, cooks and servants, who were sacrificed to serve their master in the hereafter.

Jade was believed to protect the body from decay and corrupting demons and therefore played a particularly important role in the funerary equipment of royal burials.

Ornaments in this hard, pale green stone were applied lavishly to the body (some of them heirlooms from earlier centuries and millennia), while kings and their immediate family received the ultimate safeguard of an all-enveloping suit made of jade mosaic.

Bronze musical bells, incense burners, lamps, braziers and mirrors suggest some of the rituals by which ancestors and other spirits were conjured into being. Other finely crafted objects from the royal workshops were made of lacquer, gold and silver, as well as silk and other perishables.